They Murdered The Pope!

Posted on August 26, 2011 by beyondallreligion

There is violence even within the Vatican Holy See.

When I was a commercial real estate broker, I was involved in a large land transaction, later completed on a property in Marin County, California.  My interested party in the purchase was Bruce Connor, associated with the Howard S. Wright Corporation of Seattle, a huge and important developer. They built the Space Needle in Seattle.

Bruce told me the following story.  Bruce went to Rome with a friend, and while he was there, his friend went to the Vatican, where his friend had a personal friend in the Holy See, which acts and speaks for the whole Catholic Church. http://en.wikipedia.org/wiki/Holy_See

When Connor’s friend came back from the Holy See, he told my client Connor, “THEY MURDERED THE POPE!”. Connor was told that there was no autopsy, no time of death, and a deep mystery. 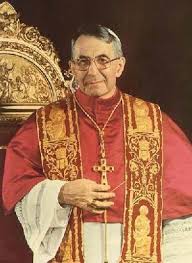 The Pope was John Paul I. He lasted only 33 days. He chose the first double name in the history of the papacy.

I later did research on this and found that this “humble” and “smiling” Pope , as he was known from Venice, far from being a pushover for the hierarchy of the Church, wanted to:

1.  Fire the Cardinal of Chicago

There were 6 suspects to the murder.

One was Roberto Calvi,  Chairman of the “Vatican Bank”, and known as “God’s Banker”, and one was Paul Marcinkus http://en.wikipedia.org/wiki/Paul_Marcinkus , who was President of the “ Vatican Bank” at the time of the Pope’s mysterious death. It turned up later that 1.3 billion dollars vanished in the later collapse of  that bank.  It ended up that five of the 6 suspects died under mysterious circumstances.  For example, Roberto Calvi committed suicide in London, after missing from Milan,Italy for 9 days, by going to the BlackfiarsBridge in London, climbing to the underneath of it and putting a rope around his neck to hang himself!

The sole survivor of the six suspects after a period of time turned out to be coincidentally enough, the head of the Vatican Bank, Paul Marcinkus, who died in Sun City, Arizona  on February 20, 2006. 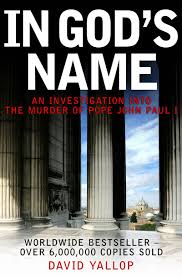 There is a book about this, the murder of this Pope, John Paul I, I found in my research. It’s called “In God’s Name”, by David Yallop, a world-wide best seller.

Having written a book about all four of the main religions supporting Violence, Intolerance, and Even War, this article shows one of the religions had MURDER within its own structure, AT THE TOP, even within the last 35 years (1978).

Also, according to this, http://www.answering-islam.org/Silas/mo-death.htm, Muhammad also died of being poisoned (by a Jewish woman).  Intrigue and politics and power plays are not so unusual in the Church.  One time there were 3 popes! Yes, three at the same time (sometimes the “other Popes” were called “Anti-Popes”.)

Samuel Butler, Author: BEYOND ALL RELIGION Most all religions are based upon a bedrock of lies. Christianity was invented by Emperor Constantine , for political purposes, based upon the myth of Mithra, a Persian savior god born on December 25 , son of a virgin. Mithra performed miracles and was later crucified. Pope Leo X (died 1521) called Christ a “Fable”. Later Pope Paul III expressed similar sentiments. Moses is based on the Sumerian life and legends of Sargon I, King of Akkad, “set in a basket of rushes and “cast into the river”. Egyptians kept exhausting hieroglyphic records. There is a complete absence of any record of Moses leading over 600,000 men, women and children away from Pharaoh’s army. Joseph Smith, founder of Mormonism, was convicted in a court of Law of being an “impostor”, today a fraud, con man, in 1826. He wrote the Book of Mormon soon after. Question: You decide: Does the text of the verses of the Qur’an correspond exactly to those revealed to Muhammad directly as the words of God, delivered to Muhammad through the angel Gabriel, as claimed? Sample or Buy New Book “Beyond All Religion”, 152 pgs, $9.95 at www.amazon.com (Kindle edition $3.49) or send mailing address and $9.95 to Sam Butler, SB 197, POB 25292, Miami, FL 33102."
View all posts by beyondallreligion →
This entry was posted in Bible Forgery, Bible Fraud, religious violence and tagged Beyond All Religion, Bible Fraud, religious forgery, Secular Humanism, The Pope. Bookmark the permalink.

3 Responses to They Murdered The Pope!