ADVISOR TO THE POPE EXPOSES BIBLE FRAUD AND FORGERY

Posted on August 28, 2011 by beyondallreligion

17 YEAR ADVISOR TO THE POPE EXPOSES BIBLE FRAUD AND FORGERY

Retired highly regarded priest, who for 17 years (1980-1997) served as an advisor to the Pope,  exposes bible forgery and fraud.

Dr. Miceal Ledwith achieved distinction as a catholic theologian who received international recognition for academic and professional  accomplishment.  An esteemed professor of Systemic Theology, president of the University of Maymooth , Ireland (National University of Ireland-Author) and fulfilling a seventeen year appointment as advisor to the Pope on the Holy See’s international  Theological Commission.  Yet at the height of his career,  he walked away to pursue a completely different kind of spiritual life — one of humble, internal initiation and transformation.  He talks about an enormous upheaval after the Second Vatican Council:

“I think most of my contemporaries were doing the same thing that I was and pondering the same thoughts, maybe not as intensely, but they were certainly as aware of those theories as I was. There were many people in positions of authority in the church that were contemplating the inconsistencies, and a lot of them ran afoul of religious authority. This is of course something that had always occurred throughout the history of Christianity.

“I spoke with someone the other day that insisted on the importance of holding on to some permanently valid religious truth. I asked “And where might we hope to find that in the gospels of the New Testament, for example? Let me suggest something.” 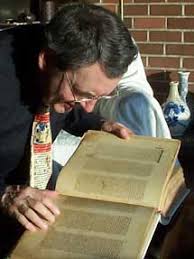 Codex Vaticanus -- In Reearch for the Truth

“Go to the Vatican Library today and look at the oldest manuscript that we have of the New Testament, which is known as the Codex Vaticanus’, and was probably one of the bibles commissioned by Constantine. Another one to look at is in the British Library called codex Sinaiticus’ which was discovered in Mount Sinai at St. Catherine’s Monastery.

Look at those two texts, both from the 4TH century, and try to find the famous story of Jesus rescuing the lady who is being stoned for adultery in John’s Gospel Chapter 8. It is a very powerful story, but it is not contained in either of those manuscripts, which means that story was inserted into the text of the New Testament for the first time at least as late as the 4th century if not later. I can give you a hundred other examples.”

(Above from SuperConsciousness Magazine Fall 2010 page 64)

IS THE JESUS STORY A COPYCAT OF THE BUDDHA STORY?

Extra (Not in the book).

Similarities between Buddha and Jesus: http://en.wikipedia.org/wiki/Buddhism_and_Christianity

• Buddha was born of the virgin Maya, who was considered the “Queen of Heaven.”
• He was of royal descent and was a prince.
• At his birth appeared a “marvelous and powerful light.”
• After Buddha was born, a “slaughter of the infants was ordered by the tyrant Bimbasara…”
• When Buddha was a babe, a saint prophesied he would be great, as did Simeon concerning Christ (Lk 2:25-35).
• As a child he taught his teachers.
• Buddha was presented in the temple, where “the idols fell down before him.”
• He began his quest for enlightenment at age 29.
• He crushed a serpent’s head.
• Buddha was tempted by Mara, the evil one, who offered him “universal dominion.”
• Sakyamuni Buddha had 12 disciples and traveled about preaching.

• He reformed and prohibited idolatry, was a “sower of the word,” and preached “the establishment of a kingdom of righteousness.”

• He performed miracles and wonders, healed the sick, fed 500 men from a “small basket of cakes,” and helps a disciple walk on water.
• He preached a “sermon on the mount” and taught chastity, temperance, tolerance, compassion, love, and the equality of all.
• He was transfigured on a mount.
• Buddha was received in his native city with a triumphal welcome.
• He was betrayed by a disciple, who led others to kill him.
• Some of his persecutors became his disciples.
• A tremendous earthquake occurred upon Buddha’s death.
• Buddha was crucified, suffered for three days in hell, and was resurrected.
• He ascended to Nirvana or “heaven.”
• Buddha was considered the “Good Shepherd,” the “Carpenter,” the “Infinite and Everlasting” and the “Great Physician.”
• He was the “Savior of the World” and the “Light of the World.”

SIMILARITIES BETWEEN KRISHNA  (around 1200 BC) AND JESUS

• Krishna is an incarnation of the sun god Vishnu, who rises or awakens on the winter solstice.
• Krishna was born in a stable of the “virgin” Devaki (“Divine One”)
• He was of royal descent and was a prince.
• Krishna is the “King of the Yadus.”
• Like the cave-born Christ of tradition, Krishna was born in a “cave-like dungeon.”
• Upon birth, the baby Krishna, was placed in a “basket for winnowing corn; in other words, a manger.”
• Great signs and wonders occurred at Krishna’s birth, including the appearance of a bright star.
• His birth was attended by angels, wise men and shepherds, and he was presented with gifts, including gold and incense.
• His foster father was in the city to pay taxes when Krishna was born.
• The hero-god was persecuted by a tyrant who ordered the slaughter of infants.
• The infant Krishna was carried across a river.
• As a young boy, he worked miracles and wonders, and was hailed as a divine incarnation.
• He was worshipped by shepherds as a god.
• Krishna was “tempted” in the wilderness by “various fiends,” before crushing the serpent’s head.
• He raised a child from the dead and healed lepers, the deaf and the blind.
• Krishna preached faith “in God’s love to man and in his mercy and forgiveness of sins arising therefrom.”
• Krishna miraculously fed the multitudes.
• “He lived poor and he loved the poor,” humbly washing the feet of guests.
• Like Jesus, Krishna continually manifested his divinity and then denied it.
• He was transfigured in front of his disciples.
• Krishna was anointed with oil by a woman bearing a jar of ointment.
• Krishna had a beloved disciple named Arjuna or “Ar-jouan.”
• A fig or banyan tree figures prominently in Krishna’s myth, as the god is depicted approaching a fig tree, where he “utters a sort of parable.”
• Tradition holds that Krishna died after being shot in the foot while under a (fig) tree, leading to claims he was pinned against the tree by an arrow or “crucified.”
• After his death, he ascended to heaven, where he lives on.

Samuel Butler, Author: BEYOND ALL RELIGION Most all religions are based upon a bedrock of lies. Christianity was invented by Emperor Constantine , for political purposes, based upon the myth of Mithra, a Persian savior god born on December 25 , son of a virgin. Mithra performed miracles and was later crucified. Pope Leo X (died 1521) called Christ a “Fable”. Later Pope Paul III expressed similar sentiments. Moses is based on the Sumerian life and legends of Sargon I, King of Akkad, “set in a basket of rushes and “cast into the river”. Egyptians kept exhausting hieroglyphic records. There is a complete absence of any record of Moses leading over 600,000 men, women and children away from Pharaoh’s army. Joseph Smith, founder of Mormonism, was convicted in a court of Law of being an “impostor”, today a fraud, con man, in 1826. He wrote the Book of Mormon soon after. Question: You decide: Does the text of the verses of the Qur’an correspond exactly to those revealed to Muhammad directly as the words of God, delivered to Muhammad through the angel Gabriel, as claimed? Sample or Buy New Book “Beyond All Religion”, 152 pgs, $9.95 at www.amazon.com (Kindle edition $3.49) or send mailing address and $9.95 to Sam Butler, SB 197, POB 25292, Miami, FL 33102."
View all posts by beyondallreligion →
This entry was posted in religious forgery and tagged Advisor to Pope, Bible Forgery, Bible Fraud, Expose, Ledwith, religious forgery, religious fraud, Vatican. Bookmark the permalink.