This is just a sample. There is  awesome revealing and shocking information in the book:  http://tinyurl.com/7cz2cwv

Joseph Smith, the prophet and founder of the Church of Jesus Christ of Latter-day Saints (Mormons) tells us that the Book of Mormon was translated from some golden plates shown to him by a heavenly messenger on September 21, 1823 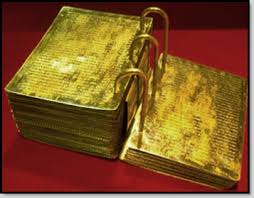 THE WEIGHT OF THE PLATES

The weight of the plates makes the story incredible. The heavenly messenger told Joseph Smith that plates were of gold. Joseph described the plates as being 6 inches wide, 8 inches long, and something near 6 inches in thickness. Gold has certain interesting properties. It is a very heavy metal, its specific gravity being 19.3. It is very soft and malleable. Plates made of gold would therefore pack down very tightly when stacked. A little figuring will reveal to the reader that the plates weighed 200.81 pounds or thereabouts!

The base of the monument on the hill in New York where Joseph Smith allegedly found the golden plates depicts him kneeling and receiving the 200 pound plates from the heavenly messenger with outstretched arms. Quite a physical feat! 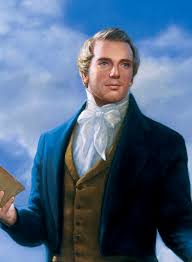 Imagine Joseph Smith wrapping his linen shirt around this 200 pound block of gold plates, tucking it casually under his arm and strolling off towards home, some three miles distance! Imagine him further, running at the top of his speed through the woods, jumping over logs, and knocking down not one or two, but three assailants in the process, all the while with the 200 pounds of gold plates safely under his arm!

Before founding Mormonism, Founder of Mormonism Joseph Smith was convicted on March 20, 1826 of being an imposter:

Before founding the Mormon movement, Joseph Smith was convicted by a court of law in New York of being an imposter. Reading the case, one concludes that today we would say he was convicted of fraud.

Joseph Smith, the founder of the Mormon movement, had at least 24 wives. One was 14 years old, and after the marriage considered herself as an abused child. Here is a list of his wives from official church records:

Brigham Young was the President of The Church of Jesus Christ of Latter-day Saints (LDS Church “Mormon” Church) from 1847 for 30 years, until his death.

Young had 55 wives. One was 15 years old. Young had 57 children by 16 of his wives. Here is a list of his 55 wives: http://en.wikipedia.org/wiki/List_of_Brigham_Young’s_wives